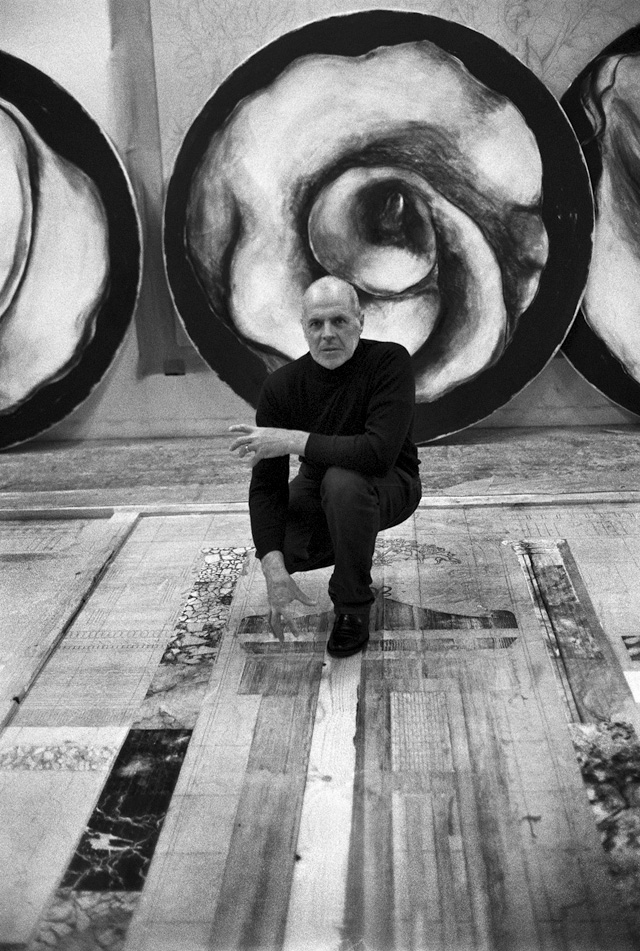 In the early 1980s his work changed, affected by the widespread return to painting and figuration. Reference to the Renaissance and Mannerism became the distinctive feature of his research, associating quotations from the antique with highly gestural pieces (La condanna dello sguardo, 1983/84). A few years later he reduced the explicit recall to the past, moving on to several cycles: Angeli della memoria, Frutti italiani, Vasi alchemici (1985/86). Then 1987/89 were the years of Die Zauberflöte and Black flowers, watercolors and oils on canvas emphasizing the sinuous and metamorphic character of plants. In the 1990s the artist travelled widely abroad: Scotland, England, Australia, Senegal, Hungary, Turkey, Lithuania, Germany, Finland, Greece, Spain and Portugal. These places inspired him to broaden his reflection on the plastic form (1992, Alberi della luna; 1993, Blu turco; 1995, Estasi lituana) while heightening his
interest in pure color, as is displayed in the cycles on clouds and water lilies: 1994/95,
I giardini dell’anima; 1996/97, I cieli sopra Berlino; 1998, Frammenti di cielo (frescoes – encaustics); 1999, Nugae; 2001, Nuvola fulva; 2003, Luci preliminari (ceramic, majolica, porcelain and blown glass). In his more recent works Venuto explores the relation between the painted surface and the physical perception of its limits (2005, Cjantadis: large-format oils). In addition he defines the terms of a freer insertion in the space-environment of wall painting. This is exemplified in the series Paraventi (Screens), mobile frescoes (2010), or the apsidal frescoes in the church of the Marigolda at Curno (BG) in 2011. On the other hand, Costellazione, a huge wall installation consisting of frescoes, mosaics and encaustics, was designed for the LIV Biennale d’Arte di Venezia in the Magazzino 26 (Warehouse 26) of the Porto Vecchio (Old Harbor) in Trieste. In 2013 Venuto took part in the Festival “Cruzando Fronteras” in Mexico with the work “Alcatraz. Homenaje a Tina Modotti”.